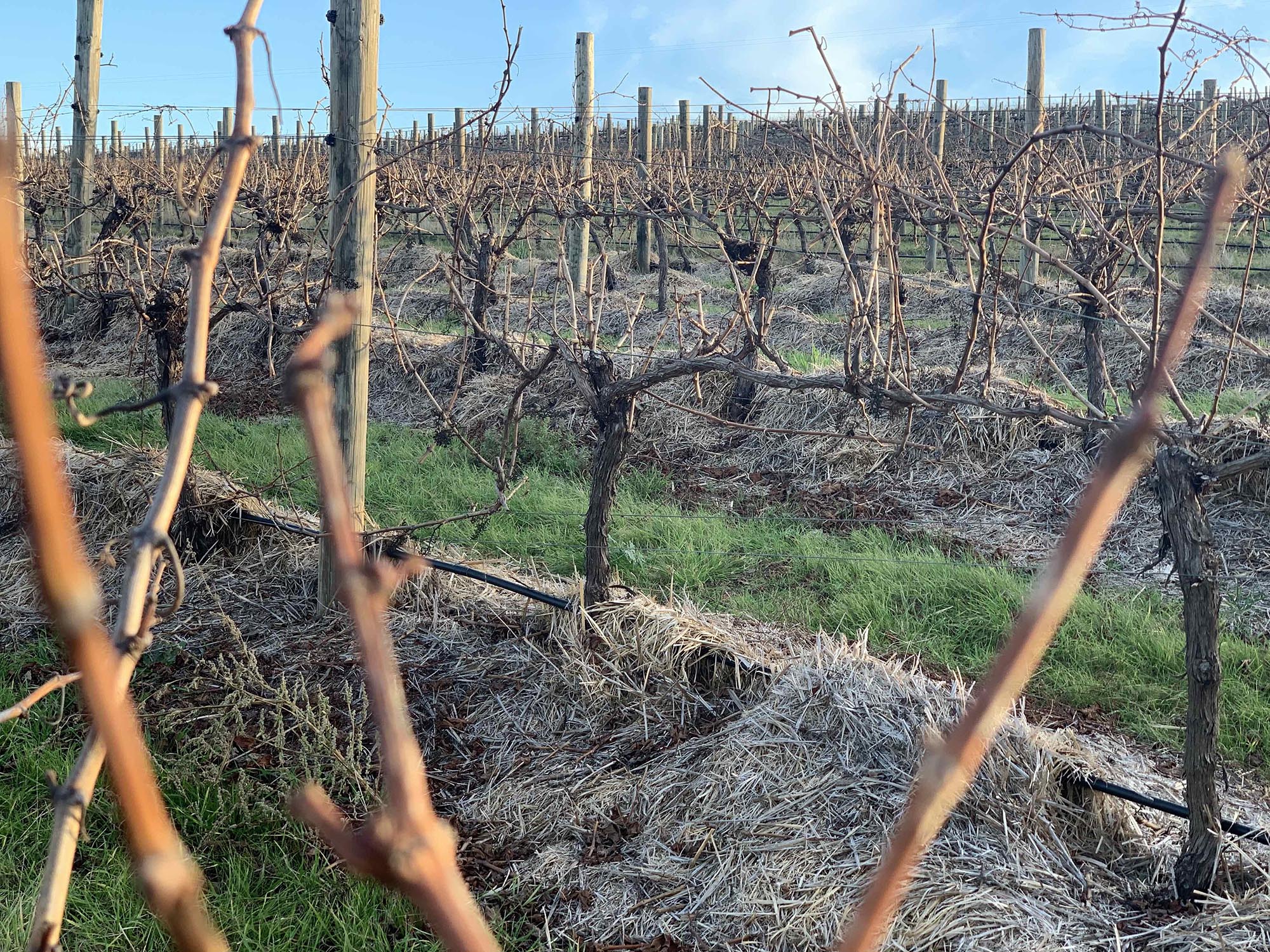 One minute, COVID restrictions are being lifted and everyone is feeling positive about all the plans they made for July and beyond.  Nek minute, Melbourne’s being locked down suburb by suburb, and at the top of my mind, what happens to our hopes of a day snipping vines in the sunshine?  I had been looking forward to Workshop 3 for so long.

Thank god for the brilliant minds at Austin’s though.

“Pivot” has been a bit of a catch cry this year (anyone who hasn’t been bombarded with *that* gif from Friends is clearly living in some kind of alternate reality) and pivot our Rent a Vine team did.

The entire Workshop 3 was switched to “remote learning” to keep things fair and equitable for everyone (the Melbourne lockdown contingent vs the comparably free-roaming Regional Victorians) but also, to keep their own staff (and vines!!) as safe as can be.

Beginning with a series of “Don’t worry, we’ve got you” emails to put our keen winemaking minds at ease and culminating in an online workshop and Q&A session accompanied by some (hand couriered) new release premium Austin’s vinos and L’Artisan cheese to match, Workshop 3 might not have been *quite* what we imagined a few months ago, but it was absolutely a shining beacon of wine-y light in an otherwise dreary locked-down Victorian July. 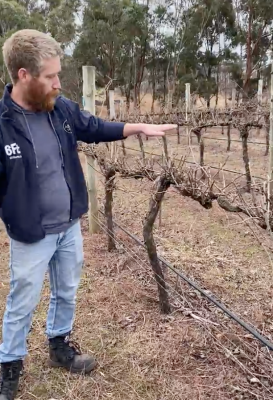 How exactly the vines are trimmed depends on a variety of factors.  If you’ve ever driven through a landscape covered with vineyards, you’ve probably noticed that not all vineyards look the same.  That’s because not all grape vines are grown in exactly the same way.  It can depend on which varietal you’re growing, if you’re growing organic or not, or it can even depend on the age of the vine.

In our intro to pruning, Austin’s Chief Winemaker Duncan took as all through the process of “spur pruning”, which is the prevalent method at Austin’s vineyard.  This can be easily mechanised and is the most common pruning method on Vertical Shoot Position (VSP) trained vines.

For those mathematically inclined followers – if Austin’s were to employ the revered “cane pruning” method, which is A LOT more labour intensive (and requires a lot of skill and knowhow to do well), it would take around FIFTEEN THOUSAND hours to prune the entire vineyard.  That’s over five years working 8-hour days or 625 days working around the clock.  Even with a highly skilled workforce of 20 pruners, it works out to three months of full-time work.

It’s pretty clear that it’s not an option with 150 acres of vines to get through.  Brand new baby vines (which need an extra special level of care) notwithstanding, all of the Austin’s vines are pruned by machine and then hand snipped to optimum bud/shoot level to ensure the ultimate quality/quantity of the grapes for the following year’s harvest.

How much do you prune off the vines?

Cutting and shaping the cordon or “arms” of the vine determines the number of buds that are allowed to become grape clusters, promoting a favourable leaf to fruit ratio for the preferred yield.

What the pruner decides to leave becomes the basis for the next year’s crop.  If pruned too severely, the vines’ fruitfulness and strength may be compromised.  Conversely, if pruned too little, the vines will push out too many shoots and leaves and produce too much fruit and become unbalanced.  The overabundance of fruit will mean the crop will have a hard time ripening, and this in turn could lead to fewer shoots and stunted growth in subsequent seasons.

This is pretty intense stuff (especially if you’re not a seasoned gardener) and by the time we get to our Zoom workshop (luckily not five years later), people have plenty of questions, but it’s also pretty obvious that we’re all kind of keen to get to the main event… tasting our wines!! 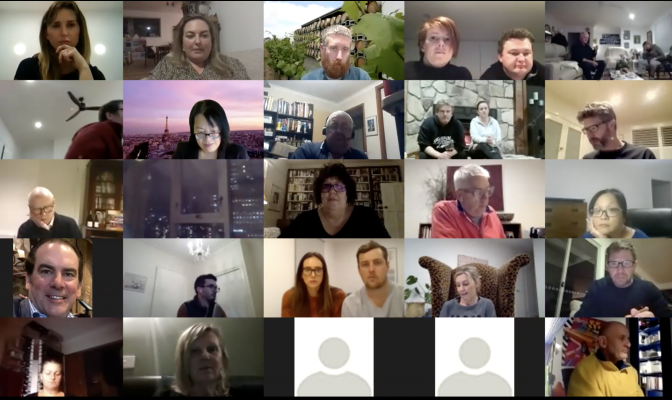 After spending the last 3 or so months fermenting away (and being expertly tended to by our fearless leader, Duncan) – the grapes WE picked are ready for the ultimate test!

Each member of RAV was sent 4 little tasters of our vinos.  2 different clones (D2V6 vs MV6), 2 different oak options (Charry vs Subtle).  And while we were warned that these babies were barely finished fermenting and wouldn’t necessarily taste like a “finished wine” (I’m not going to get into blending here… that’s for Workshop 4!) – I have to say, they were pretty bloody good.

Choosing our favourites was actually pretty eye opening.  I thought Option C (MV6 in Charry Oak) was the clear winner.  Pretty red fruits, smoky oak flavours, it was everything I wanted in a Pinot; the flavours of the D2V6 were a lot bolder, but I found them a little harsh. It’s easy to assume that everyone has the same perception of what tastes “good”, but taste, as they say, is subjective, and to see it in action, with 30-40 odd people having their say, was actually pretty fascinating. 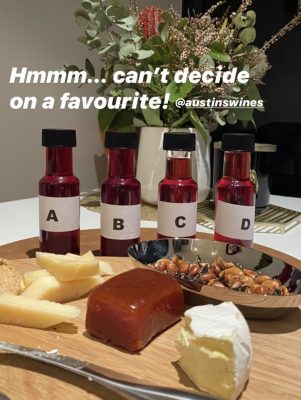 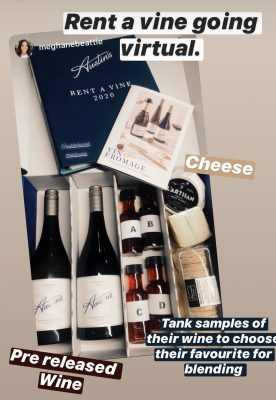 Lucky we don’t all have to agree on one wine, because I, for one, am pretty ready for Option C to be the hill I die on and this workshop certainly didn’t come with the disclaimer that fights to the death could be involved…

Eli is currently holed up in one of Melbourne’s hottest of COVID hotspots and is particularly glad to have plenty of wine related activities to keep her mind off the state of the world right now.

Find out more about the 2021 Rent a Vine membership program here.